The dream of any aviator of the western world of the 1920s and 1930s was to accomplish the transatlantic crossing aboard an airplane, much like the aspiration of a navigator Christopher Colombus was to cross the same ocean by boat. In 1927, Charles Lindbergh amazed the world by crossing the Atlantic solo and non-stop. Only six years later, Italo Balbo commanded the Atlantic crossing of 24 seaplanes piloted by Italians. This crossing, which did not bring technological innovations, was one of the most spectacular in the history of aviation. Philatelists gave this event significant importance,
Catégorie : Livres pdf Michel Pratt 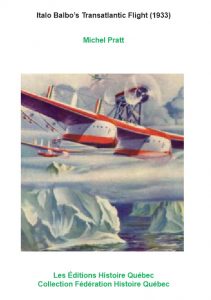 The cruise was a mass transatlantic flight from Orbetello, Italy, to the Century of Progress International Exposition, Chicago, Illinois. The expedition, organized by the Italian Regia Aeronautica, began on July 1, 1933 and ended on August 12 of the same year. It comprised 25 Savoia-Marchetti S.55X seaplanes crossing the Atlantic Ocean in formation, according to the press of the time the greatest mass flight in aviation history.

The Italian Squadrons, led by General Italo Balbo, were welcomed enthusiastically in the Netherlands, the UK, Iceland, Canada and particularly in the United States of America, where they became known as the Italian Air Armada. A publicity success for Fascist Italy, Balbo further viewed the expedition as a pioneering step towards commercial flights across the Atlantic.

In Chicago, a crowd of over 100,000 gathered to cheer the arrival of Balbo’s fleet on the evening of July 15. July 15 was proclaimed Italo Balbo Day and on July 17 Chicago’s Seventh Street was renamed Balbo Avenue. Balbo received a gold key to the city from Mayor Kelly. United States Commissioner to the Century of Progress Exposition Harry Stewart New said that if Balbo remained in the US he might be elected President. In a ceremony that Balbo found strange, they initiated him into the Sioux tribe as “Chief Flying Eagle”. Being very cautious about his public image, Balbo was unsure whether to accept and agreed only after hearing that former US President Calvin Coolidge also received such an honour.

The Italians were “hailed by millions” on their arrival in New York City according to the front page of the New York Times of July 20. 1500 persons watched the planes from the Empire State Building. Balbo was quoted saying that “New York’s welcome exceeded all expectations, more so even than Chicago’s”.

On July 20 Roosevelt invited Balbo to lunch at the White House, where he went with a select group of his most senior aviators. The President offered his personal congratulations and tried to persuade Balbo to prolong his stay in the US to start a countrywide tour. Balbo enjoyed the lunch with Roosevelt, which he found to be “very cordial and direct in his manners, like all Americans”.] A crowd of 60,000 attended the celebrations at Madison Square Garden. The city of New York organized a parade down Broadway on motorcycle escort on July 21 which made a great impression on Balbo, who said: “in our lives, it would be extraordinary to experiment something as grandiose again”.